The synthetic uses of different peroxides for organic synthesis have been widely studied. Among these peroxides, meta-chloroperbenzoic acid (MCPBA) is an efficient oxidizing reagent and have been used for many oxidative transformations. A peroxy acid (or peroxyacid, peracid) is an acid which contains an acidic –OOH group, actually an oxygen more than carboxylic acids (Peroxyacids are generally slightly less acidic than their carboxylic acid counterparts). They are generally strong oxidizers. The oxygen-oxygen bond is quite weak (about 33 kcal/mol or 138 kJ/mol). As we shall see, this is what leads to the high reactivity of these compounds. 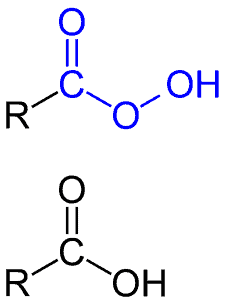 Depending on literature, you can find different abbreviations for this compound, such as mCPBA, MCPBA, or m-CPBA. It all boils down to the same thing:
M (or m, 3) – “meta” position of chlorine (chlorine is on the third carbon atom);
C as “chloro” – chlorine;
P as peroxy;
B as benzoic;
A as acid. 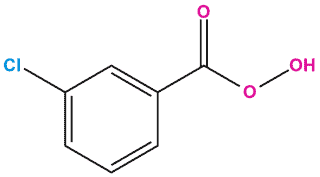 Advantages of meta-chloroperbenzoic acid are its handling because it is present as a powder (crystalline white solid), which can be kept in the refrigerator. Nevertheless, a material of purity >75% is rarely available commercially, since the pure compound is not particularly stable. mCPBA is a strong oxidizing agent that may cause fire upon contact with flammable material.

MCPBA is versatile applicable as peracid for use in laboratories. The main areas of use are the conversion of ketones to esters (Baeyer-Villiger oxidation), epoxidation of alkenes, conversion of silyl enol ethers to silyl α-hydroxy ketones, oxidation of sulfides to sulfoxides and sulfones, and oxidation of amines to produce amine oxides.

For reasons of the atomic economy, the use of MCPBA in production should be avoided. The research concentrates on this area rather on the use of hydrogen peroxide in connection with suitable catalysts or in situ generated, simpler peracids, such as peracetic acid or on potassium peroxymonosulfate (Oxone). In many reactions, MCPBA with an outstanding reactivity is, however, more selective than hydrogen peroxide and other peracids.

When MCPBA added to alkenes, epoxides are formed. This is a prime example of a stereoselective. The stereochemistry of this reaction is always retained. That is, a cis alkene will give the cis-epoxide, and a trans alkene will give a trans epoxide. 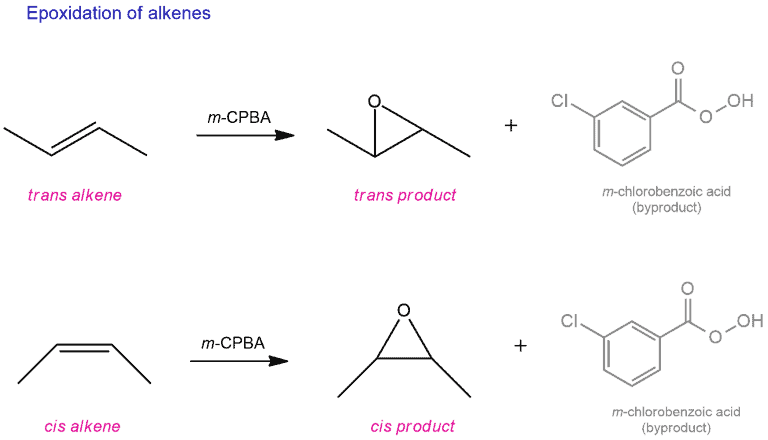 The reaction itself happens through a “concerted” transition state. That is, the bond between the oxygen and the alkene is being formed at the same time that the O-O bond is breaking and the proton is being transferred from the OH to the carbonyl oxygen. (Those little-dotted lines represent partial bonds) The absence of intermediate explains why the reaction is completely stereoselective.

The Baeyer-Villiger oxidation is a reaction that forms an ester from a ketone by the insertion of an oxygen atom, usually via peroxyacids such as MCPBA. This is a rare example of a reaction that results in the oxidation of a ketone. This reaction begins by nucleophilic attack of MCPBA. The per-acid oxygen is added to a carbonyl carbon of the ketone. Then follow the hydride and alkyl shifts.

Alkyl shift: The lone pair on the oxygen then re-forms the C=O bond, which then leads to a 1,2-shift of a carbon bond to the oxygen, breaking the (weak) oxygen-oxygen bond and forming an ester in the process. 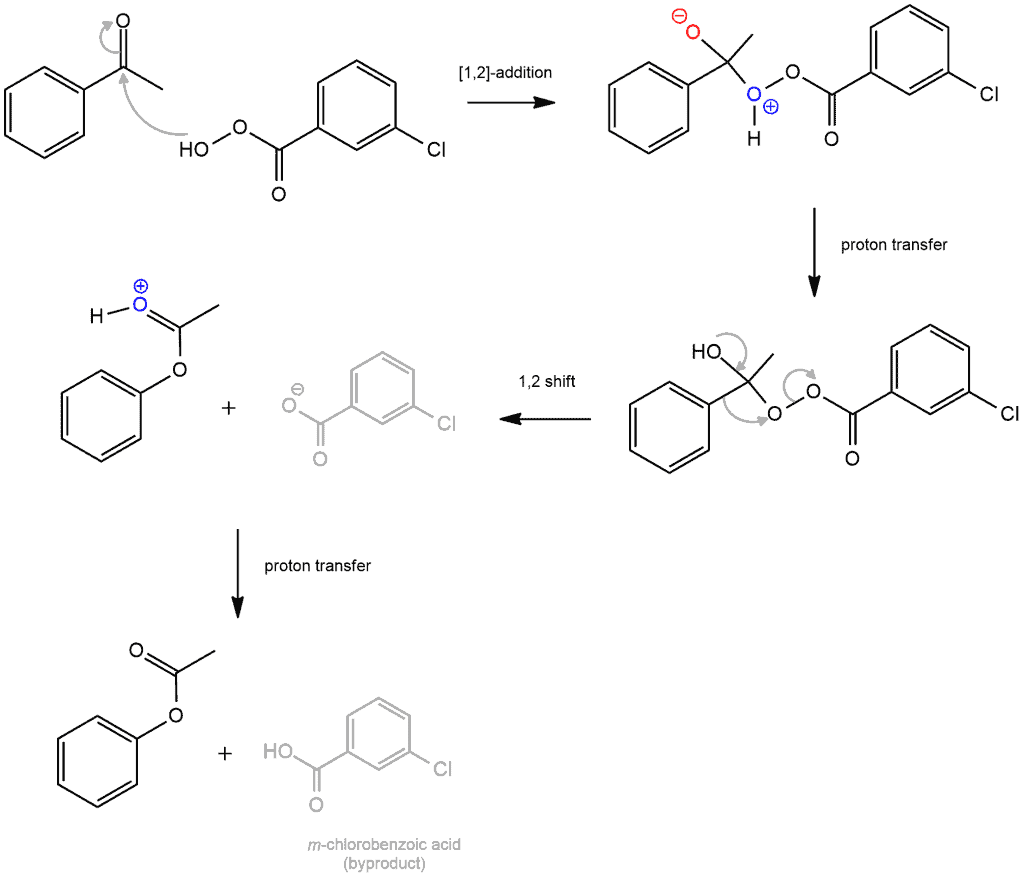 The crucial thing is alkyl shift. As we know, two R groups are attached to the carbonyl group of a ketone. When these two groups are different, the question arises which of the two R groups will migrate? Which of these two R groups will participate in alkyl shift? Migrating group ability corresponds – somewhat – with carbocation stability. Suffice it to say that H is the best migrating group, tertiary alkyls are next, and methyl groups are the worst. Aryl groups (like this benzene group in the example) are in the lower middle range of the scale.