The pKa values are used a lot in organic chemistry. Understanding the proper use of a pKa table will give you the ability to recognize which acid-base reactions will happen and which will not.

Recall that pKa is equal to the negative logarithm of the Ka.

And the lower pKa value the stronger the acid.

In the following pKa table, molecules are rank in order of their acidity, from strongly acidic to weakly acidic. The order of base strength is the inverse of acid strength. For example, if our acid is H2SO4 (sulfuric acid; first in the table), the pKa of one of the protons is approximately -9. When the proton is removed by a base, a conjugate base (bisulfate ion) of this acid is obtained. As you can see, the sulfuric acid is the first on the list with the lowest pKa value which means that this is the strongest acid on the list, and its the conjugate base is the weakest base on the list. The conjugate base of a strong acid must be weak to resist reprotonation. If it is easy to lose a proton it should be really hard to regain it, otherwise, you wouldn’t have a strong acid. A stronger acid will tend to react with a stronger base to produce a weaker acid and a weaker base.

How to calculate pKeq for organic acid-base reactions

But pKeq can obtain from this formula:

We will apply it to the previous example: 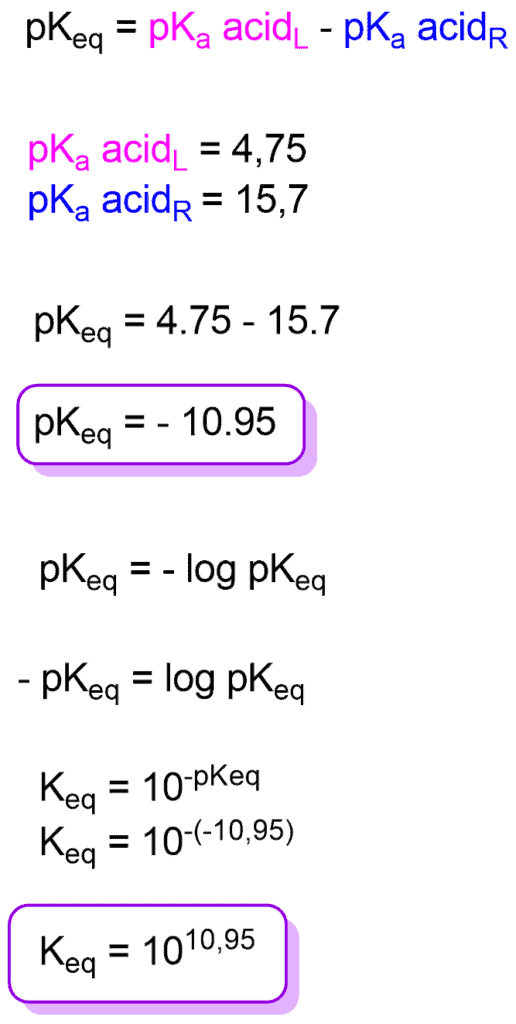 As we know from general chemistry, when the equilibrium constant is much greater than 1, the equilibrium lies to the right. We have a large amount of product compared to reactants.