Although inorganic compounds, these two reducing agents are often used in organic chemistry. Now, we will consider sodium borohydride which is also known as sodium tetrahydridoborate and sodium tetrahydroborate. This molecule consists of a sodium positive ion which doesn’t react and an anion of BH4‾. In this anion, a boron, as an exception to the octet rule prefers to have just three attached electrons meaning a total of six and three bonds. But in this molecule, a boron has four attached valence electrons, a complete octet and therefore, a formal charge of -1. The negative charge is on boron but think of it as simply having a neutral BH3 attached to a reactive hydride which participates in the reaction. 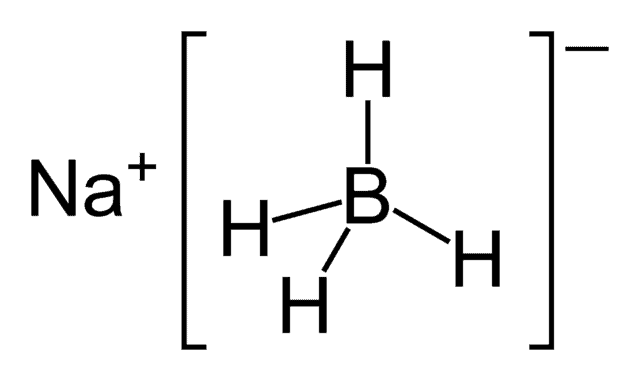 NaBH4 is similar to lithium aluminum hydride (LiAlH4) but less reactive. LiAlH4 is a stronger reducing agent because it can reduce a wide variety of compounds including carboxylic acids, esters, nitriles, amides, aldehydes and ketones at room temperature while the sodium borohydride reduces only aldehydes and ketones at room temperature. As H (2.10) is more electronegative than Al (1.61), H carries a significant negative charge and LiAlH4 reacts violently with protic solvents like H2O and ROH to form flammable H2. So we have to use inert/anhydrous/ nonprotic solvents like R2O and THF.

NaBH4 is usually used in hydroxylic solvents such as MeOH, EtOH, and H2O. Sometimes THF is used as a solvent, either alone or as a solvent mixture (ex. THF/MeOH or THF/EtOH). In MeOH and EtOH, NaBH4 decomposes overtime to give the respective borates. An excess of NaBH4 can be used to compensate for the decomposition of the reagent over time.

NaBH4 reacts very slowly with protic solvents at room temperature because B (2.04) and H (2.10) electronegativities are comparable. So reactions with NaBH4 can be easily conducted using a protic solvent like ROH. However, NaBH4 decomposes with -COOH which need to be protected by forming its Na salts by reacting with NaOH. In this way only –CHO or -CO- groups are reduced while –COOH can be regenerated from its Na salt.

Sodium borohydride, as already mentioned, is a weak reducing agent which makes it slower and safer but limits what it will react with. It is very effective for the reduction of aldehydes, ketones, acyl chlorides, thiol esters, and imines. Under typical conditions, it will not reduce esters, amides, or carboxylic acids. It is also used in the second step of the oxymercuration reaction to replace mercury (Hg) with H.

Reduction of carbonyl compounds to alcohols

In these reactions, the π bond is broken so as to remain another between C and O. Then, hydrogen is added to the carbon atom (this is a reduction), and also extra hydrogen is added to the oxygen atom to remove the negative charge. Simply, we are breaking a C-O bond and replacing it with a C-H bond. This is what helps us classify the reaction as a reduction. The first hydrogen involved in the reduction comes from hydrogen borohydride and the other comes from the acid because, in order to make the alcohol, the oxygen needs to pick up a proton (H+) from either water or acid that is added after the reaction is complete. Lots of different acids can be used in the last step. It’s not important which specific acid is used, just that something is present that can form the alcohol.

NaBH4 also makes an appearance in the oxymercuration reaction. Specifically, NaBH4 is used in the second part of the reaction (demercuration) to break the C-Hg bond and turn it into a C-H bond.

In this reaction, the alkene is treated with mercuric salt [Hg(OAc)2] and water or alcohol to obtain an alcohol or ether, respectively. (When alkene is reacted with an alcohol, the reaction is called alkoxymercuration.)

The mechanism of the reaction of sodium borohydride with aldehydes and ketones consists of two parts:

In the first part of the reaction (oxymercuration), H‾ detaches from the BH4‾ and adds to the carbonyl carbon. This forms the C-H bond, and breaks the C-O bond, resulting in a new lone pair on the oxygen, which makes the oxygen negatively charged.

In the second part, demercuration, our NaBH4 participates. This mechanism has not yet been clarified, but what we do know is that the mercury acetate group is replaced by a hydrogen in a reduction reaction.

How to interpret IR spectra

How to use a pKa table